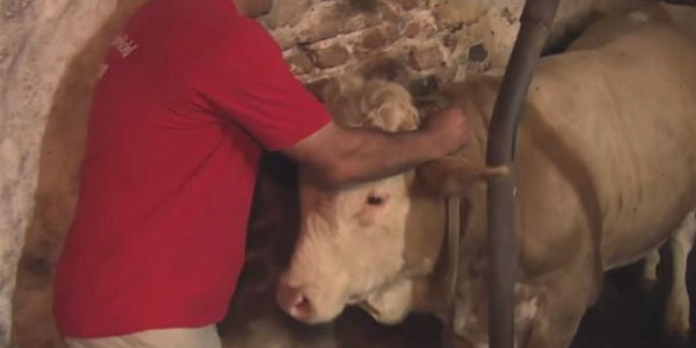 We all know that man’s generic best friend is a dog. We have heard the saying millions of times in our lives, but we have never heard of a bull being man’s best friend.

The only saying we really hear about bulls? “Like a bull in a china shop.”– However, it really is unfair toward them as they can’t help that they are large and in charge when it comes to gracelessness.

For one bull, Bandit, he was never the bull in a china shop. Why? You may ask… Because he was tied in a barn, imprisoned really, with no place to run, play, or relax other than one spot. 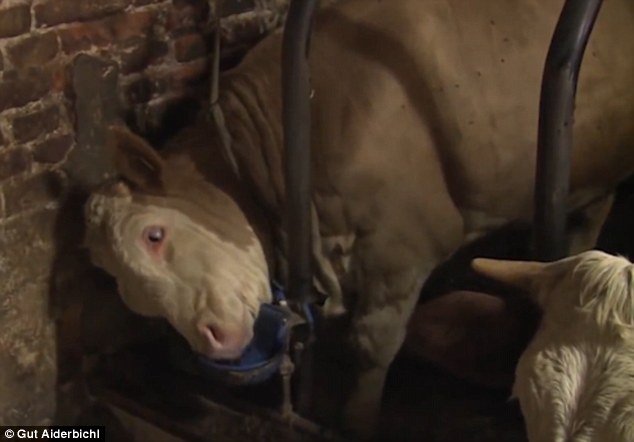 Bandit, from the time he was brought into this world until he met his new best friend, had never left the trough he was shackled to. He never ran freely or strolled in a pasture.

As soon as they made eye contact and the man came close enough, the bull gingerly licked his hand. While the bull may not have had a friend before, he sure has one now in this man that set him free.

In the video, you see the man gently taking the bulls leash off the fencing and releasing the collar from his neck after he guides the bull out of the caged area. As the bull experiences freedom for the first time ever, he learns what it is like to live without a cage fence around him.

The bull kicks and bucks down the aisle where he was housed for the entirety of his life, he frolics in the hay that is piled in the center. The man knew then that he couldn’t leave Bandit behind.

He decided to load the bull into the back of his trailer and take him home with him. You can see the hesitation that the bull has when getting into the back of the trailer, but it is so worth it. When he gets to his new home, a wide open space full of fresh hay, he leisurely hops about, relaxes, and enjoys his new home. 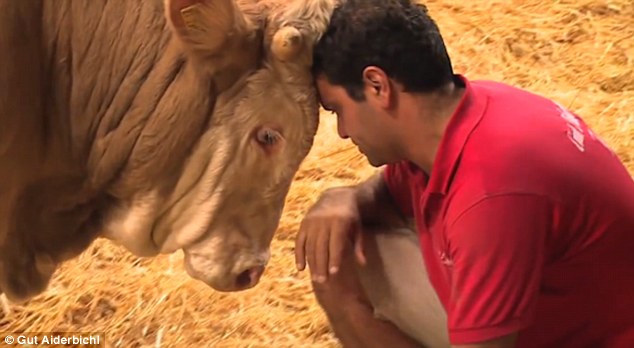 For the first time ever, Bandit has a friend– The man that rescued him and brought him to his new home. Bandit will never have to be confined or imprisoned again.

While it is sad that this bull had to be rescued at all, thank goodness that his new best friend found him. If you think this bull has a perfect life now, like and SHARE this with your family and friends now!