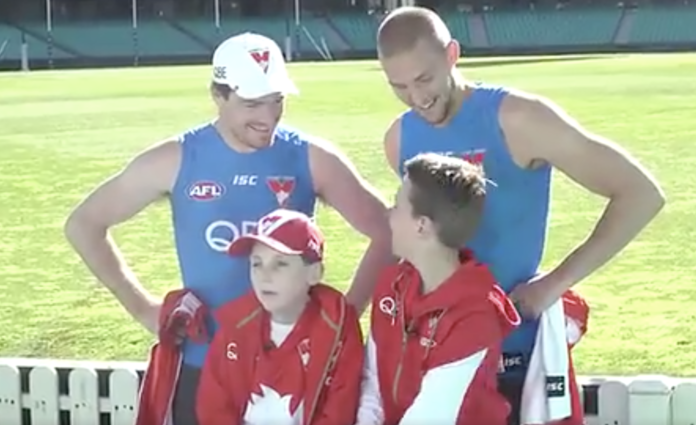 Mark Smith and Jarryd Haines are your typical neighborhood boys who love a good laugh and enjoy sports. The two met as young boys and have been friends since then. Not even the diagnosis of Mark with cancer of the brain and spine at the age of nine has affected their friendship. The two are inseparable and get to enjoy their favorite sport, football, together whenever they can.

A couple of weeks ago as people made their way to the Sydney Cricket Ground to watch the final regular match between the Sydney Swans (the boys’ favorite team) and the Carlton Blues, all was normal until a fellow spectator, Jonathan Drennan, noticed something spectacular going on behind him.

During the second quarter of the match, the radio stream commentary that Mark usually listens to died and Jarryd stepped in with a commentary of his own. As Jarryd rumbled on, Mark gripped his ball as his best friend informed him that their favorite player, Lance “Buddy” Franklin, had just scored his tenth goal of the game.

This is not something you see every day and Drennan’s attention shifted from the match going on below him to the two boys seated behind him. As the game drew to an end, Drennan informed Jarryd’s father that he had enjoyed his son’s commentary very much only for Jarryd’s father to tell him that his son always looks out for Mark; that this is typical Jarryd having his friend’s back.

True to form, as the Sydney Swans anthem rented the air, Jarryd helped his friend Mark navigate the stairs on their way out of the stadium.

As Drennan boarded a bus home, what he’d just witnessed stuck with him and he sent out a tweet about it. He, however, didn’t expect what happened in the next few hours. The Swans contacted Drennan asking about the boys and how they could reach them.

Drennan who had not even taken down their names embarked on a search for the two and with help from Australian Media, he got a hold of them a few days later.

The two were invited to a training session with the Swans and were given a hero’s welcome as they entered the stadium using the players’ entrance. The players clapped and cheered before meeting and shaking hands with the two boys.

During introductions, Jarryd stepped in, as usual, to ensure Mark got to meet all the players. Upon introducing Buddy, All Mark could muster was the word “Wow.” Midfielder Kieren Jack informed the boys that they were an inspiration to the team and that they would be an integral part of their next match.

Come Saturday, the boys got to run onto the pitch with their favorite team amid cheers from the crowd, before watching the match together with their families from a box laid out by the club.

The Swans won their match against Essendon and are on their way to booking themselves a slot in the finals if they maintain their winning form. Jarryd gave Mark a commentary throughout the match, and their team, the Swans, is inspired to keep winning thanks to the boys’ friendship.

If you’re inspired by the story of these two young boys and their amazing friendship, please SHARE this with your friends and family today!