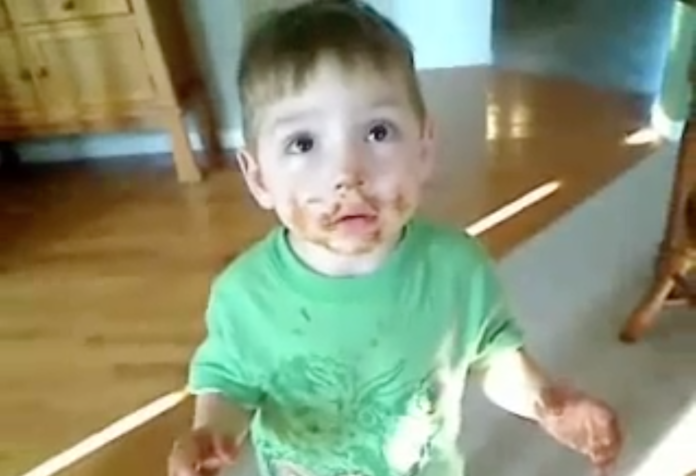 Every parent faces battles with their children, especially in the toddler years. Whether it’s with temper tantrums, pulling hair or whining, every child does something.

Well for one mom, it was the always dreaded, potty training battle. So she decided to try to make it all fun and games, by offering a special reward for each successful trip to the potty.

The plan seemed to be a hit with the 3-year-old twins, especially on the day they found their potty training prizes in their mom’s secret hiding place. (Well, at least it was secret at one point).

The twin’s father, Dave was spending a day at home with the boys while his wife was out of town. He discovered his son with a messy face and realized that the twins had come across their mother’s special stash of prizes and candy in her closet.

“It’s funny because it seems like things like that only happen when my wife is out of town,” commented the twin’s father, Dave.

3 year old, Matt didn’t know how to react when his dad confronted him about the incident and the missing stash of chocolate bars.

In the video, it was obvious that he had gotten into something as there was evidence on his face, literally.

When he was asked about it, the silence and the blank stares he gave were hilarious.

Dave said, “It was one of those moments where it was so hard not to laugh at him, but I knew I couldn’t. When you’re a parent you have to be careful to make sure you indicate that something is not appropriate.”

Poor Matt knew he did something wrong, but he just didn’t want to admit it. However, his twin Marc, who did not participate in the chocolate shenanigans, made sure to play it safe and tattle on him.

Dave and his wife said, “My favorite thing was when his brother ratted him out from behind the scenes, upstairs.”

There are so many comments you could make about this incident.

“Boys will be boys”.

“This is what happens when they get quiet.”

The messy face and melted chocolate in the carpet was probably a pain and the missing chocolate cost $5, but the reaction to it all was priceless.