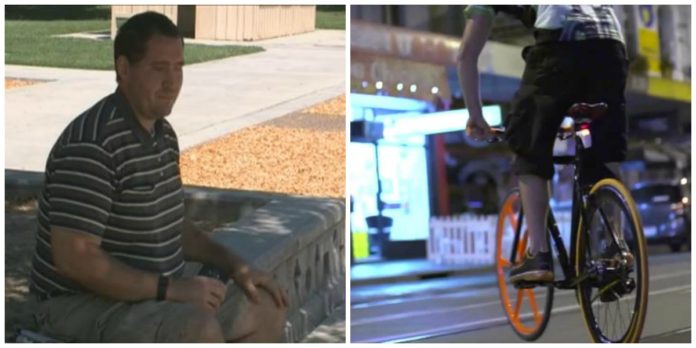 We hear about people stealing things all the time. Sometimes they just take something from a person on the street. And other times, they will rob a house or a store.

And although it is very cruel, what makes this worse is that this actually happened to a man sitting on a bench, minding his own business. And that man was Bob Cole.

Bob Cole is a legally blind man from Modesto, and he was sitting on the bench waiting for a bus at McHenry and Coolridge. Obviously, he couldn’t see anything out of the ordinary, and he didn’t hear anything either.

Cole, who was getting ready to pick up his two sons from school, was on his phone when out of nowhere, someone came by on a bike, and stole it from his hands.

“It doesn’t surprise me. I know I would make a really easy target,” said Cole.

But he was extremely upset. He had suddenly felt a jerk and then boom, it was gone.

Cole wasn’t about to let him get away that easy. He began yelling for the person to get back here, and even started running after him.

People were walking along the sidewalk, and some knew who Cole was. But this woman didn’t know Cole, but she could see the distress he was in. So instead of just walking along like everyone else, she decided to do something about it.

This woman had witnessed the entire thing, and decided that she was going to go after the thief herself, and she wasn’t coming back without the phone. And luckily, she was able to get the phone back.

Cole was surprised but extremely grateful that a complete stranger would go out of her way to do this for him. It was touching, and it meant the world to him.

And in this case, the good outweighs the bad, and we couldn’t be happier with the way things ended. We are so glad this woman was able to go get his phone back.

If you are thankful that this woman went out of her way to help Cole, and get his phone back, SHARE this post!