GladWire
Animals Bashful Cat Only Liked Dad Until He Knew Figured Out What Was... 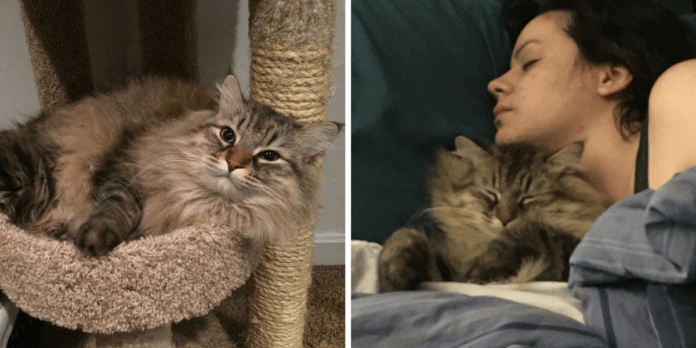 Lisa Kitchen and her cat Max had a chilly relationship. Kitchen brought Max into her home as a baby, but he seemed to be a much bigger fan of her husband. She would find Max curled up on her husband’s chest and could see the two of them bonding right before her eyes.

Even more interesting to her, Max was very playful with her husband, but did not extend the same courtesy to her! He wouldn’t cuddle with her or be playful towards her at all. All of this suddenly changed one day, to Kitchen’s surprise.

One day when she came home after work, Max meowed loudly at her, which he never did before. He did this a few times in the next few days, so she decided to see if his affection was genuine. Most interesting to her was that Max would even now crawl in the bed and cuddle with her.

To Lisa Kitchen the strange behavior from Max made her wonder if maybe something more profound was going on. For some reason, she decided to take a pregnancy test on the off chance that Max knew something that she did not. Imagine her surprise when she discovered the great news. She was pregnant, and Max was showing a real protective streak towards her now. He suddenly wouldn’t let her out of his sight, and he cuddled with her every night.

It’s a known fact that cats have many super powers and being able to tell when a woman is pregnant is one of them, as Lisa Kitchen found out. A cat is susceptible to human pheromones and also can notice the subtle changes in body language that accompany a growing belling in a woman! Your favorite house pets are very astute and are early warning pregnancy detectors. Dogs also have a similar ability, and they tend to become very protective around new mothers. Cats are not as well known for their protective streaks, but Max indeed proved he wanted no harm to come to Lisa.

Max has lost all interest in Lisa’s husband, and that’s unlikely to change anytime soon. The baby is expected to arrive next summer, so it’s likely Max is going to shadow Lisa the whole time. The next time a cat starts to act more loving and protective around you or a woman you know, you may have an early clue that something big is about to happen! Max’s instincts were perfect, and Lisa has enjoyed all the attention from him. Whether that changes when the baby comes remains to be seen.