GladWire
Awesome Barber Notices Toddler Trapped In Vehicle And Does Only Thing He Knows... 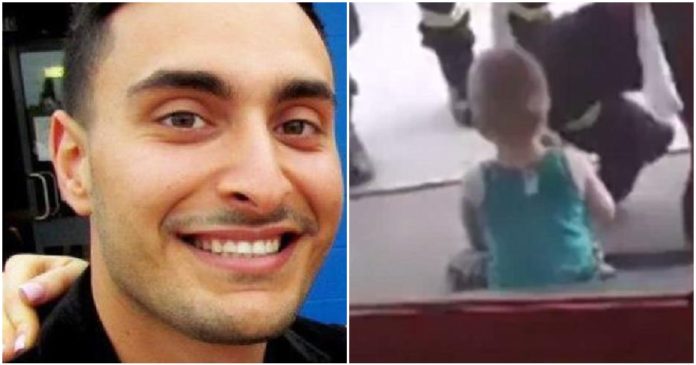 “As soon as we saw him, we were like, ‘Oh my god, do we break the window, are we allowed to do that?’ So we just rang the police straight away,” Issa Khadem said. When Issa was trimming hair this week, he looked out at the thermometer and noticed it was reaching record temperatures. That’s when he noticed a little boy in the back of a car who was crying and overheating and he sprang into action.

The barber was quick to phone 911 and tell them about the dangerous situation that was unfolding right before his eyes. The police then came and smashed the window so that they could gain access to the child and treat him for dehydration. The father was later found drinking at the local pub, and he is now behind bars for the terrible decision he made.

The man has been charged with leaving a child in a motor vehicle causing distress, neglecting a child in his care and resisting arrest. As if that wasn’t bad enough, there was more to the story. When the mother of the child came to pick the small boy up, it was found that the man had left his second son, a two-year-old, at home alone.

On that particular day, the temperatures had reached 104 degrees Fahrenheit. Those kinds of temperatures are extremely dangerous for anyone who is left exposed to the high heat for a long time. Without the quick thinking and brave actions of Issa Khadem, there’s no telling what the outcome could have been.

“It’s just not a safe thing to do, no matter where you are. We really shouldn’t be leaving kids alone locked in cars. We should be taking them with us or finding someone else to take care of them. A car is not a place for childcare,” State Control Center spokesman Graeme Baxter said.

Thankfully, this story had a happy ending and no one was hurt in the process. We think the brave and quick actions of Issa should be recognized, simply because he fixed the poor decisions of a careless father. Without his help, that poor little boy could have gotten seriously hurt.

If you want to raise awareness and you’re glad this sweet baby was saved, then SHARE it with your friends and family.

Also, watch this social experiment below. Someone put a fake baby trapped in a car to see how many people would help, the results are appalling.