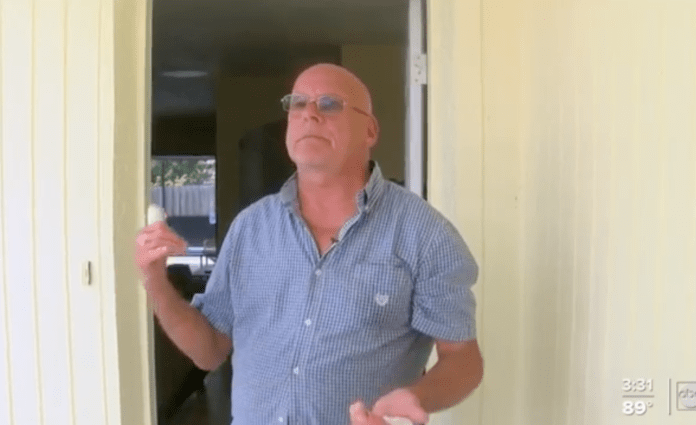 Jake, is an 8 month old chocolate lab and he loves visitors even though an alligator just tried to eat him for lunch.

McCoy was walking his 8 month old puppy near a pond behind a local middle school when out of nowhere a gator shot out of the water and pulled Jake under.

“He was in the death roll with that old gator,” said McCoy.

“It was kind of like a snake darting really fast. It was super fast,” she said.

The teacher was shocked when she saw McCoy jump in after Jake.

“I previously read up on my environment and gators. I got around, thumbed him the eye, picked him out of the water so he couldn’t get anywhere until he let the dog go. And in the interim he decided, I don’t have him, I’ll bite you,” said McCoy.

Both the dog and the owner needed stitches, the school nurse also ran out to help Mike.

“It’s not often you get a gator call,” said Shelly Churchill.

The Florida Fish and Wildlife Commission reported that the gator is somewhere between seven and nine feet long. A trapper has been contracted to remove the alligator from the pond.

FWC said that attacks like this are rare however people should use caution near water during the warmer months.

Mike said that he didn’t think twice about saving his puppy.

“No hesitation. It’s just the way it is,” he proclaimed.

FWC reports that serious alligator bite incidents are rare however people should keep their distance.