GladWire
Animals Abandoned Kitten Rescued From Certain Death And Taken To Shelter When Her... 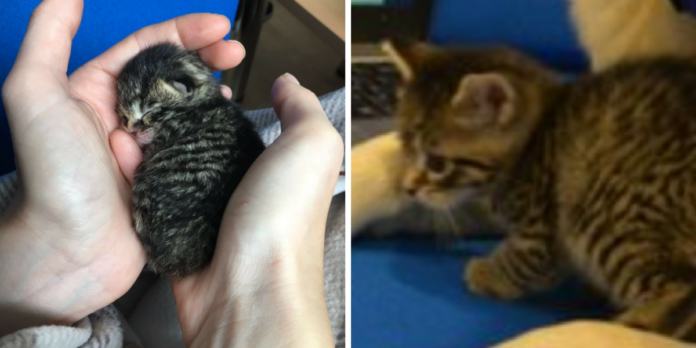 One little kitten didn’t get the best start to life. She was abandoned in a London garden, left to fend for herself, or die.

Young kittens need to be warm, fed and taken care of constantly for the first few months of their lives. This kitten got a few days of care before she was left behind.

But fortunately, she was found and rushed to the Battersea Dogs and Cats Home!

They named the kitten Ava and she is quite the little fighter! She made it to 5-weeks-old without a problem!

A kitten as young as Ava still needs constant care and attention even though she made it through the first few fragile weeks of her life.

Ava is being diligently cared for by Nurse Meg Goldring, who feeds this little darling every 2 hours. That is quite the task for anyone, but she has obviously been doing a great job. Ava spends the majority of her time in the Battersea clinic office where it is easy to keep track of her.

And this is where she met her dear friend, Barney the Labrador!

He is a kind dog, only three-years-old himself. Barney didn’t have the best start to life either. He was born in a puppy mill and adopted by a family who just couldn’t keep up with him and all the energy he had as a pup.

That was when he was brought to Battersea and Head Nurse Rachel Ab’dee fell head over heels for him. He has been at the animal shelter ever since!

Barney is such a sweetheart he practically adopted little Ava when she moved in to the shelter. He was like a self-proclaimed kittensitter!

Regardless of what his routine had been like before this little furball had appeared in his life, he dropped everything and began following her around, cuddling, playing, and all around caring for this kitten. It was adorable!

Rachel Ab’dee explained, “Barney adores Ava and can’t wait to come into Battersea every morning so he can see her. It’s great for Ava too, because she doesn’t have a mum or brothers or sisters, so Barney has become her best friend and favorite playmate. It’s wonderful to see them so happy together and to know that their most difficult days are behind them.”

They even would cuddle up and watch TV together! Paul O’Grady: For the Love of Dogs was their favorite show!

Ava’s luck hasn’t run out yet because she has a home lined up for when she is old enough to move out on her own! She will certainly miss her friend, but a kitten treated with that much love and affection is going to be excited to be a part of anyone willing to make her part of their family!

If you love a story about overcoming the odds SHARE!