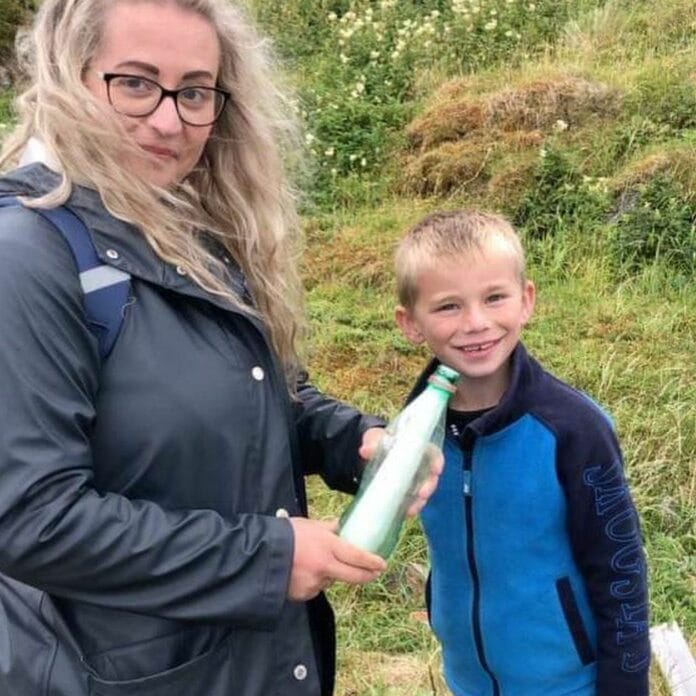 While at the beach in Gasvaer, Norway with her son, Elena Andreassen Haga found a washed-up piece of 1996 history.

Joanna Buchan was only 8-years-old when she dropped a bottle out of a fishing boat off Peterhead in 1996 for a school project. The bottle contained a letter that she wrote describing different things she enjoys and many other things that people may want to know.

Haga and her son, Eliah, discovered the bottle written 26 years ago.

Buchan addressed the letter to the “discoverer,” and talked about how her family’s house was a “rather big house,” her love of sweets, the book “Charlotte’s Web,” and her dog. She ended the note by saying, “By the way, I hate boys.”

The bottle had been found about 800 miles from where it was originally dropped.

Haga told BBC Scotland when she read the note and how far it had come, “So we opened it and we had to be really careful because, as you can see by the picture of the letter, it has probably been in the water for some time, but we managed to fold it out and we’re able to read that this is actually from Scotland, so that was kind of cool,” She found Buchan on Facebook and sent her a message. Now 34 and a doctor in Australia, Buchan told BBC Scotland that she was shocked to see the “absolute gem” of a message.

She added, “I vaguely remember doing a message in a bottle at Peterhead Central School that we sent off Peterhead in 1996.”

She laughed at her 26-year-old letter saying that when she first read it, “I just died laughing. There’s some really lovely lines in there, like what was important to me at the time.”

She also said to BBC Scotland, “It’s clearly done its time in the North Sea.”