GladWire
Animals 150 Rare Tropical Birds Would’ve Died If It Wasn’t For These Police... 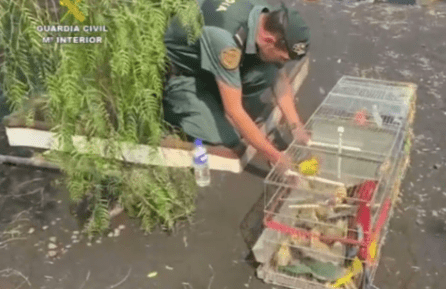 Many people own pets. People own cats, dogs, fish, and even birds. Cats are fun to watch run around trying to catch a light that is shining from a flashlight or a laser beam light. Dogs are fun to play fetch with and they are good cuddlers. Fish Are fun to watch swimming around. And birds are cool to see when you let them out of their cage to fly around. And they are just cool to say you have one.

Birds are very good pets to have. One of the top reasons for someone to get a bird is because they are super smart and interactive. According to Peaceful Pets Aquamation, “Birds Are Extremely Intelligent, Easy to Train, and Social. Being intelligent makes birds easier to train than other animals. Since they are so smart, they’re interesting to watch and be around. Their love of learning makes them fun to entertain and be entertained by.” Birds are fun pets to have around and easy to take care of.

The La Palma Volcano Eruption is an ongoing volcanic eruption in the Canary Islands. It has made it so that many people had to, and have to evacuate. Volcanic eruptions happen when magma, melted rock, rises to the surface. CBBC Newsround states, “Magma is formed when the earth’s mantle melts. Melting may happen where tectonic plates are pulling apart or where one plate is pushed down under another. Magma is lighter than rock so rises towards the Earth’s surface.” Because of this volcano in the Canary Islands, many people had to flee with no time, leaving a lot behind.

One day, the police went to an abandoned house and saw that there were many birds in it. They couldn’t just leave the birds in the house to die from the eruption so they got as many people as they could find and worked together to save these birds. These weren’t any ordinary birds, they were tropical birds, making them more rare. There were 150 birds trapped in this house. The police officers gathered all of the birds and took them to a rescue center. If the police wouldn’t have taken the time to save these birds, they would have died from the volcanic eruption.