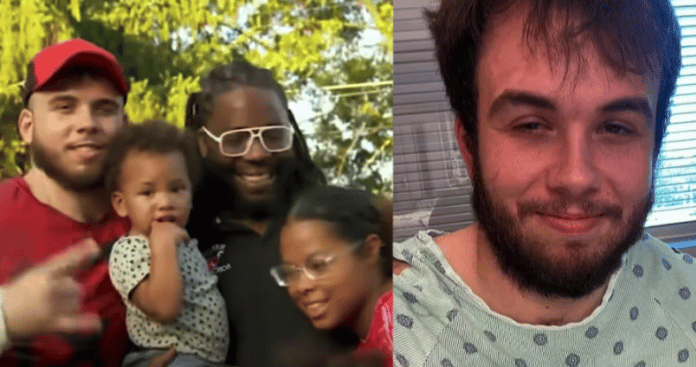 A gentleman is being recognized as a hero by his hometown after he raced into a burning house to save a small child.

Nicholas Bostic, 25, was driving aimlessly about his town after a late-night quarrel with his fiancée when he noticed the house entirely engulfed in flames.

His shouts while running inside are said to have awakened 4 kids and a family friend from their slumber. Seionna Barret, the oldest of five children, had gathered her siblings and was getting ready to descend the stairs from the second level where they met Nick.

Seionna, though, informed Bostic that her 6-year-old sister wasn’t with them once they were outdoors. Bostic, who entered the Lafayette, Indiana, house through the rear door, claimed that the bottom floor of the building had turned into a “black lagoon” of smoke as a result of the fire.

He searched every bedroom on the second level, but the child was nowhere to be seen.

“He moved to a window to exit the house when he heard a child’s cry coming from downstairs,” city reporters wrote, who spoke with the man. “Nicholas had an inner dialog with himself. He knew he was there to get that child out, and even though the fire and smoke downstairs frightened him, he would not quit.”

He crept into the pitch-blackness with a t-shirt covering his lips as he followed the sounds of the girl’s cries.

Then, after locating her, he returned through the smoke, went upstairs, shattered a window with his bare hands, and leaped to the ground on the lawn, where a fire and rescue crew had already arrived and were starting to put out the fire.

Bostic was evacuated to the hospital with first-degree burns, a major laceration on his arm, and smoke inhalation. The little kid was unhurt.

His cousin started a GoFundMe to help pay for Bostic’s medical expenses, and it exceeded its $100,000 goal by collecting $556,000 for a hero the community intends to recognize at the following Lafayette Aviators minor league baseball game.

According to Bostic, the encounter gave him a “new lease on life,” making him eager to play football or drift in a drift car. He was in the flaming house long enough to see numerous lives flash before his eyes.