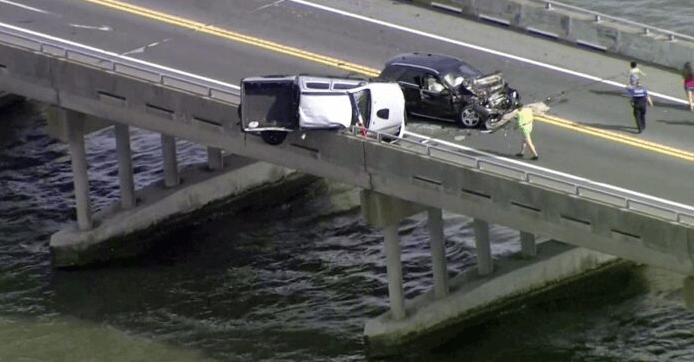 There are many stories of courageous people selflessly saving the lives of others, but this story stands out. One day, Jonathan Bauer and his teen daughter were out and about when all of a sudden they got involved in a 5 car pile up on a bridge. It was serious and left 8 people hospitalized and a truck dangling over the edge of the bridge.

After they got into the wreck, Jonathan Bauer made sure his daughter Ava was okay. Thankfully she was. He then went out and looked for people that might need help. He then went up to the pickup truck that was dangling over the edge of the bridge and what the passenger said was heart turning.

The passenger frantically said that there was a toddler that fell out of the truck and was in the water. “I looked over and I saw the car seat, some other items, and then about six feet away from the car seat, I saw the little girl and she was on her back floating perfectly on her back, arms moving, legs kicking,” Bauer said.

He had to do something so he took his shoes and socks off and jumped in the water with no hesitation. He swam to the toddler and she seemed not fully conscious. He lifted her up over his shoulder and started patting her on the back. After patting her a few times she finally coughed up water that was in her system.

Joe and Alayna Oertel, boaters that saw this event unfold, came over to Jonathan and the little girl and took them back to shore. They were greeted with paramedics and the little girl was airlifted to Johns Hopkins Children’s Center in Baltimore. She has made a full recovery since then.

Jonathan Bauer quietly slipped away wanting to be anonymous. But not long after, they held a press conference to commemorate Jonathan and his heroic actions. Jonathan is a humble hero and his actions will forever be remembered.