GladWire
Awesome A Hero Who was Just Passing By Saved a Mother and Son... 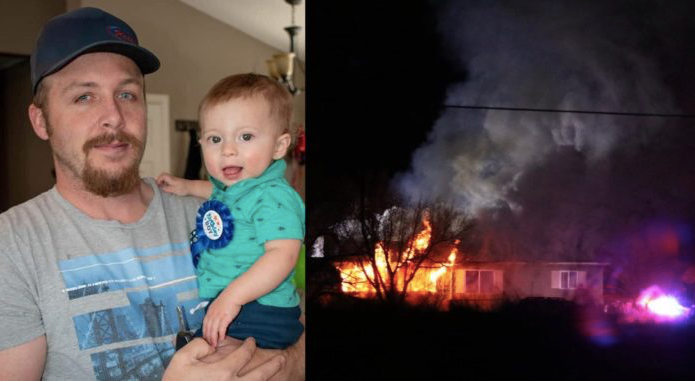 This is a story of a local hero in Jamestown, Wyoming. One night a mom, 34, was in her home with her kids, 4, 6, 8, and 12, and they were all sleeping. When all of a sudden their house bursted into flames. Ryan Pasborg was passing through the neighborhood to go to work and saw smoke and flames coming through one of the windows.

There were no sirens or flashing lights to be seen so he immediately pulled over. As he was stepping out of his truck, he saw a young girl and her two brothers coming out of the house. They told him that their mom and little brother were trapped inside. He, with no hesitation, rushed into the house through the garage door. When he entered he could not see anything.

Ryan, thinking quickly, got onto his hands and knees so that he could get a better sight on where he was going. He started to crawl and soon after, ran into a small boy. He grabbed him by the waist and carried him outside to safety. He put them all in his truck so that they could stay warm in the below freezing temperatures. He rushed back into the burning house and went searching for the mother.

After a few minutes of crawling through the house, he noticed something on the ground. It was the mother laying on the floor struggling to breath and badly burned. He lifted her and brought her to safety outside the house. Split seconds later, he started to do measures to save her life. Soon after, she took a gasp of air and started to breathe again. He lifted her into his truck and took them to the highway and waited for the first responders.

Jason Mower, Sheriff Deputy, stated that he had never seen someone as brave and selfless as Ryan Pasborg. Jason Mower said, “I think this is the first time in nearly 15 years of law enforcement that I’ve ever heard of a total stranger truly going above and beyond in a way and in a situation that many wouldn’t have dared to face.” Sheriff John Grossnickle said, “Not only is it a blessing in its own right that Mr. Pasborg was in the right place at the right time, but his willingness without second thought to risk his own life to help save this family was the difference between life and death for this young mother and her child; he gave them a fighting chance.”

Later, Ryan Pasborg had purchased hundreds of dollars of clothing, necessities, and food and gave it to the family while they were staying at their grandparents house. Not only is Ryan a hero, but he is a super generous man.