GladWire
Animals Dog Seen In Barrel, Not Moving-Then Rescuers Get Closer And See The... 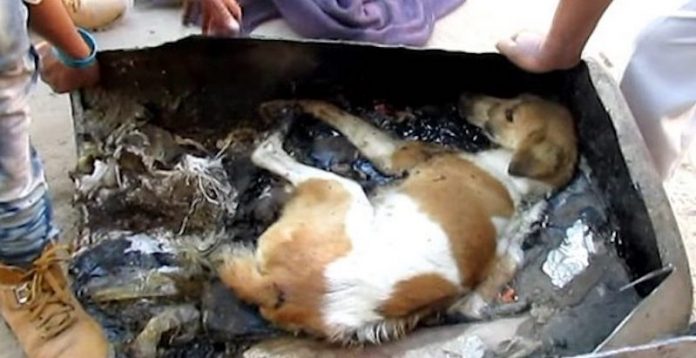 Animals are such lovable creatures, and when they are in trouble and injured, it just breaks our hearts. Especially when they can’t do anything about it, and just lay there, helpless and defenseless, just like this poor pup.

People had been walking around, when they noticed a stray dog hiding in a large barrel. They didn’t think anything of it, until they got a closer look and realized that this dog was trapped in tar, and couldn’t move.

They believe she had crawled into the barrel to try and keep warm during the cold nights, but her body heat eventually ended up melting the tar into her fur. And because of that, her skin was burnt to the metal of the barrel.

Rescuers picked up the barrel, and brought it over to where other people would be able to help. They were able to cut the barrel open, and begin to free the poor lil baby.

The dog was stuck for days, and had no food or water. So their rescue attempt got a little more desperate.

The rescuers got vegetable oil, and were able to soften the tar with it. Afterwards, they began peeling it off gently. It took them a little over 3 hours to peel off enough tar for her to be able to stand.

But they didn’t give up. Instead, they gave her the love and attention that she needed, and she made a full recovery.

We are so thankful that this dog was rescued and is now doing so well! She definitely deserves all the love!

If this story touched your heart, and you are thankful this pup made a remarkable recovery, SHARE this post and watch another rescue video below.