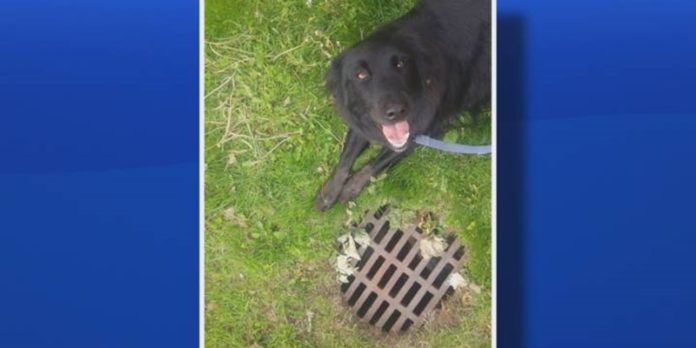 Who said cats and dogs can’t be friends? This was certainly the case in this situation when a dog and his owner were taking a walk along the street. Shelly Colette was walking her dog Cash along the road when she noticed her puppy acting quite unusual. The dog was standing on top of a sewer grate looking down and refusing to move. Shelly tried to convince the dog to move, but he simply would not budge.

That’s when she noticed why the dog was standing still and refusing to leave. At the bottom of the drain was a tabby cat, sitting in filth and water. It didn’t take Shelly long to realize who the cat was. This cat had been missing for weeks and his picture had been posted on flyers around town. His name was Ghost, named for his ability to be elusive to his owners, and his owner was desperately hoping for his safe return home.

Shelly immediately called Ghost’s owner Colette called Ghost’s owner Izzy Francolini, who rushed to the scene. “I was at work and I jumped up and my boss was super lovely and just told me to get him,” said Francolini, who works at a hand died yarn company. As soon as she got there, she contacted workers who could come and save her beloved feline friend. Unfortunately, this task proved to be a lot more trying than everyone had originally thought.

The grate had been rusted shut and was nearly impossible to get off. After one worker couldn’t get the job done, he called for back up and five men with three sledgehammers showed up in order to start at breaking down the metal bars.

With the loud noise and all of the commotion, Ghost was clearly frightened. He retreated down into a pipe and refused to come out. After the bars had been broken, Izzy thanked the workers and explained she planned to camp out in the middle of the street until the cat returned.

“Someone came and gave me a blanket so I made a little blanket fort basically. Every so often friends and strangers came and went. A neighbor charged my phone for me. Two people brought me dinner. A lady gave me five bottles of water,” said Francolini.

After not hearing or seeing the cat, she returned home. Not long after, a neighbor said that she could hear meowing coming from the storm drain. Izzy ran to the gate and there was Ghost, three pounds lighter and hosting two ticks but other than that very alive and happy to be home. 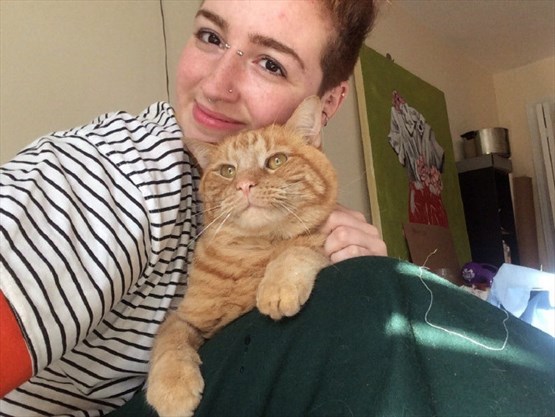 We are so glad that this kitty found its way back after being lost for numerous weeks. Without a doubt, she will be getting the love and care she missed out on over the weeks as she recuperates at home for the next couple of days. Without the help of Cash, she may have never been found. These animals had a true connection, and it was nothing but beautiful.

If you are thankful that this little kitty was found, and that this pup was able to alert his owner of the kitten, SHARE this post, and spread the cuteness!