GladWire
Awesome Brothers Witness Car Crash- When They Go To Help, They Take Off... 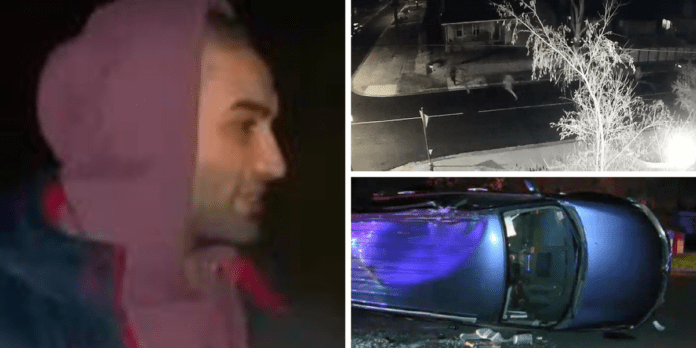 CCTV, orclosed-circuit television, is a very valuable tool in today’s day and age. It aids us in capturing the faces of thieves, lets us see license plates, and other strange events.

When this car went careening down towards a couple of bystanders and some cars on the street, the men were unsure about what to do next, but their heroic actions are being praised for the amount of bravery they showed.

Footage shows Jamil Mokbel and his brother in hot pursuit of two men who smashed a stolen car and tried to flee the scene. When they heard the crash, they worked hard to free the car passengers thinking that they were involved in some freak accident. “They were banging on the windows so we helped pull them out,” Mr. Mokbel said. “As soon as they got on their feet they did a runner down the street,”

“They were banging on the windows so we helped pull them out,” Mr. Mokbel said. “As soon as they got on their feet they did a runner down the street,”

The two brothers lead in hot pursuit of the strange criminals who were running down the street. The 29-year-old learner driver, who had failed to display his L-Plates and his unlicensed passenger was taken to hospital under police guard. After a bit of blood work, it was found that both of the men were under the influence of illegal drugs and they have been charged accordingly.

Although they are heroes, “their bold act did come at a slight cost.” During the crash, Jamil’s girlfriend’s car was totaled, but thankfully everyone is okay.

If you are proud of these two neighborhood watch members who stepped up and served their community in the best way possible, then be sure to SHARE and spread the word of their courageous act. They deserve every bit of recognition that they can get, and their actions should not go unpraised. Thank you, men, for keeping your community safe!